More on my journey:

The story continues in Kansas City, where the weather is steady 90s, probably more like 100, with ridiculous humidity. The kind that makes everyone want to stay indoors, except you can’t because you’re on vacation, so you’re basically the only person walking around for blocks at a time. Except, oddly, runners. I would love to have my body trained for long runs in humidity.

After sleeping in (and missing breakfast yet again), I packed and checked out. Choice hotels is offering a $50 cash back promotion for every two nights stayed at many of their hotels, so I’m taking advantage of that -I just have to make separate one-day reservations at different places. So my next night in KC will be at another choice hotel within the city.

Leaving the hotel, I drove through River North to a cool, trendy, “Portland-style” coffee shop which was recommended by the two I met in Omaha (I’m writing these posts days apart so if I ever refer back to an event and you have no idea what I’m talking about, just call me on it). The coffee was great and it was a quirky, cool place, with air-conditioning (obviously). Quay Coffee-412 Delaware.

After this, I decided that the perfect opportunity to visit Kansas was upon me. It is a state I haven’t been to yet, and it is right across the river – Kansas City is on the Kansas border. In fact, there after two “Kansas City”s: KCK and KCMO. So, I drove ten minutes into Kansas for a renounced BBQ place which is in an old gas station. Actually, I think it still is a gas station. Here’s a pic. There was a line. It was a long line. I counted at least 75 people in line. I stood in the heat for about 5 minutes, considered calling in a take-out order, then basically said “Screw this. I’m sure KCMO has plenty of BBQ places to choose from.” So I drove back to Missouri and to one of the other restaurants that had been recommended to me, Fiorella’s Jack Stack BBQ (whatever that means). It was more like a fancy steakhouse and the clientele was very business-oriented. Lunch meetings, people talking business, cellphones beeping and ringing, I actually didn’t care for it.

But then, the national World War I memorial and museum was nearby so I went up to that, checked out the view, walked into the museum just to take a peek, but decided to pass. Basically, I love museums, but only when I know the concept and am already educated about the topic. Basically, I appreciate museums for furthering my knowledge and experience, not for basic learning. I know almost nothing about World War I so I would have nerded out and spent the entire day there. Probably the next day, too – tickets are only about $12 for a TWO day pass, and they offer teacher discounts.

After this I wandered the Crossroads Arts District which is a neighborhood with art galleries, independent workspaces, a cool coffeeshop here and there. I also popped into an awesome local shop (based in Des Moines) called Raygun. I guess I was drawn to it because of their marketing and the variety of products I saw in the window – mainly cool shirts with cool slogans. I actually ended up chatting with the two employees until past closing time. As you may have guessed this was an exchange of what to do in Portland (where they are both going soon) vs. what I should do in KC. 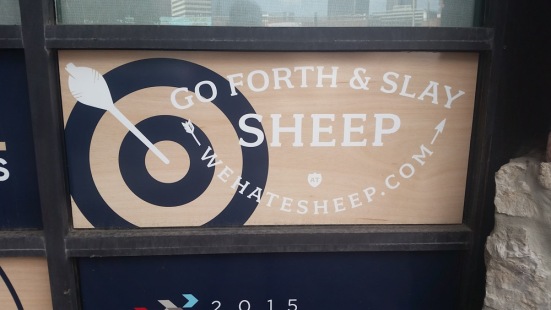 I think this was a law office in the area.

I followed their first recommendation and went to get ice cream at Glace, an artisan ice cream shop and then realized the best taphouse in town was nearby. After some drinks and dinner, I chatted with the guy there and he clued me in that he had some special beers “in the back.” I’m now even more in need of extra luggage. Since I was heading to St. Louis, on the opposite state border, next, I drove to a hotel on the east side of the city for the night. It was right by President Truman’s birthplace and museum in Independence, Mo.

Salt and Straw + Ruby Jewel are both way better. No comparison.

I slept in late, missed breakfast again, and headed east. I’m all for 4-5 drives, and unlike many people, I have no problem doing it in one straight shot. For me, though, it’s more fun to make lots of stops checking out places that are usually missed by tourists. In trying to incorporate more nature into the trip, besides the general feeling that I am in the land of Huckleberry Finn, I drove down a long dirt road (*cue the country music*) because I saw a cave system on the google map. In reaching it and reading about it on the parks website, I learned it is closed to the public because of the bat colonies and unstable ground above. Fair enough – it was a fun drive. Miles later, I ended up in…I don’t know what city, but it is one where the people stand in their yards wave to you as you drive by. I ended up in the town park overlooking the Missouri River and learned it overlooked Boone’s Lick. The maps and info pointed out that I was staring that the official end of the “American Frontier” and that the Indian land was just beyond. It was also near the start of the Santa Fe Trail. Signage also pointed out the exact spots Lewis and Clark visited on their journey down this river.

Indian Land just beyond – end of the American Frontier.

Midwesterners are apparently very proud of their interstates.

I also stopped in Columbia, MO., home of the University of Missouri and wandered downtown a bit. I didn’t visit the school.

I arrived in St. Louis fairly late and ate dinner (including gourmet popcorns) at a fancy taphouse/bistro/wine bar called The Bridge. I THEN looked on my Priceline app for a hotel and noticed at the last minute that a fancy downtown hotel, the Sheraton St. Louis City Center, had rooms for $60. It was awesome. I found street parking a few blocks over, right in front of the police department, and knew I needed to get back by 8am tomorrow, when the meters are activated.

The hotel is great. It seems very quiet, but it’s fancy. It’s a 1929 art deco building, it has a top floor sun lounge, Olympic-size pool and full-size gym. It also has parking on the bottom levels. After oversleeping, throwing on shoes and RUNNING to the car, graciously seeing it had not been ticketed (it would have only been $15), I decided to pay the $17/day for the next 24 hours of covered indoor parking. Time to explore the city. Oh yeah… before getting parking, I got another night of the hotel for the same price and asked them to extend my stay so I wouldn’t have to change rooms or checkout/checkin at different times.

First stop: Mississippi Mud coffee, which I found on Yelp, and it was located nearby. It was in an art space so I looked around first. My favorites were a local artist with synesthesia who listens to symphonies and draws the colors she sees, along with notes…it’s really hard to describe, but here’s an article on her. I chatted with the barista for over an hour, talking coffee, St. Louis and Portland with her. The coffee was some of the best I’ve had, so I purchased a bag to bring home. It was priced really well, too, and she was saying how cheap St.Louis is compared to other big cities. Definitely a plus.

Next I wandered around toward the Gateway Arch and the Mississippi River, and ended up in theCityGarden, a commmunity park with sculpture gardens, fountains, pools, and a cool bistro called “Death in the Afternoon.” It’s a Hemingway cocktail, if you didn’t know. They also own a membership-only restaurant lounge called “Blood and Sand,” another cocktail. I loved the ambience – it seemed very fancy, the people who came in seemed young and upscale, the food is high-quality and made from scratch, and while I sat at the bar, the server, who I wasn’t sure was even old enough to drink, was experimenting with creating cocktails. I told her about one I like (which my friend Heather told me about) and when she found out where I am from, she mentioned she is going to the Willamette Valley for wine tasting in October. I provided a list of my favorite places for her to see. 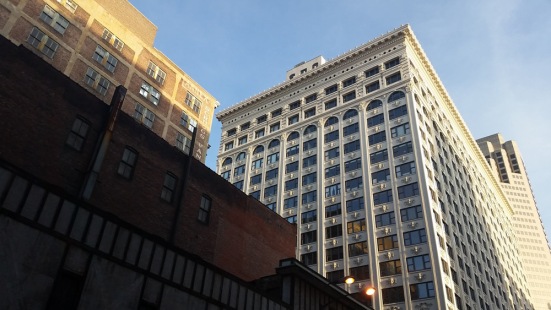 I know you were expecting a picture of this.

In the afternoon, I went to a brewpub called Side Project Brewing. It’s a small brewery, but is a big deal in the region, if not nationally. The owner of Perrenial Ales, an esteemed STL brewery runs this as an experimental side project. When an experiment goes well, it goes really well. I tried some amazing stuff, chatted with two teachers visiting from New Orleans, could tell several beer snobs were in the room, and ended up splitting a bottle of Derivation #2 with one of the teachers. It was $50 a bottle, which is a splurge, but not really when you compare it to the price of a good wine.

Success of the day: I figured out how to get through the hotel’s $10/day internet scheme. Free internet for me.

Time to leave STL. I went down to the checkout and knew they wouldn’t be able to figure out I was using the wifi for free. However, I was surprised when they said there were no charges on my account. Apparently, my parking was for free. Awesome.

Driving northeast for five hours, Chicago is the destination. My time in Chicago is really the 17th-19th, so this is a “do whatever, go wherever, stop wherever” stay. I stopped once or twice for coffee, snacks, and ended up in Springfield, the state capital of IL and the home of Abraham Lincoln. I parked in the downtown historic area where there is a walking trail of Lincoln’s law office, the first place he did this or that, the room where we wrote his inauguration speech, and more. The old State Capitol is where he practiced and where he gave his “House Divided” speech. It was an incredible building! 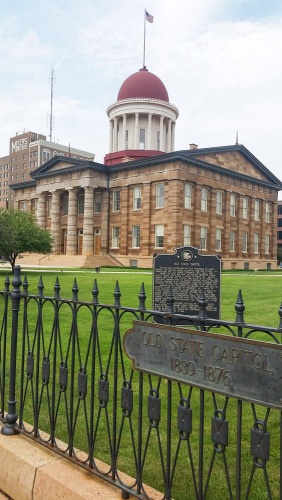 Nearby is the Lincoln Presidential Library, which I skipped. Not a tourist site. Down the road, though, was Lincoln’s family home site, where they lived up until he became president. It is a 2-3 blocks long street with the home and the nearby homes as they were. And it’s free. So cool! 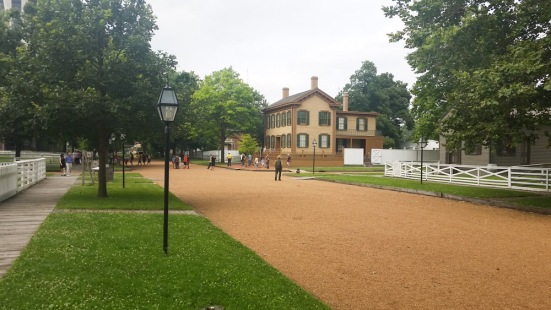 The building front and center is the Lincoln family home until 1861.

After a couple beers at the nearby microbrewery, and learning from the locals that there is exactly zero else to do in the city, I was ready to leave but first noticed on the map that the town cemetery held Lincoln’s tomb. It was an afterthought to me, so I thought maybe it was a simple gravestone.  No, it looks like this:

Heading north, I ended up on the IL-IN state border, where the renowned Three Floyds Brewery is located. Great food, great beer, and then I ended up bar-hopping with some other patrons.

I have to return my car tomorrow in downtown Chicago by 9:30. We’ll see how that goes.

Final note: I’m on timed WIFI at THE BOURGEOIS PIG cafe, so I know this post has taken me exactly 2 hours and 33  minutes. I wonder how long it usually takes me. That seems about average.