This is day one of Chicago. I arrived into town with thankfully minimal traffic. I found my way to the downtown car rental location, housed in the basement of a large building – and was then on my feet. My luggage is one rolling suitcase, a laptop bag which slides over the extended handle, and my camera bag which is on my shoulder. I decided I couldn’t really do anything in the city with my luggage in town so I headed to my hostel up in Lincoln Park, about 15 minutes away.

I wanted to stay close to the city but not spend a lot, so for the first time in a while, I am sharing a room with ‘up to five’ other guys in a six-bed hostel room in a large, very popular hostel of over 500 beds. I dropped off my bags and headed into the city.  It was almost noon so I figured  I mind as well take it easy.  I bough a cheap ticket on Stubhub for the afternoon’s White Sox game. I really enjoyed watching my first baseball game of the year, sitting in the shade and spending much of the time chatting with the girl and two guys who were sitting behind me – they had also purchased cheap seats and moved up basically right behind home plate, because the White Sox suck and their attendance isn’t great..

The game ended around 4pm, so I headed over to the hostel to check in and shower. I checked my BandsinTown app and saw that the Pitchfork festival was happening at Union Park – a small community park across town – for the next three days. I decided to make my way over there by train, with the plan that I would try to hear some of the performances before getting dinner and going to a show later that night.

When I got off the train, the park was a block away by I could recognize the voice and music – it  was one of my favorite bands, Chvrches! Seeing them for the 4th time and totally unexpected! I stood outside the entrance gates so I was a good couple hundred feed away – actually. But I could see and hear, and they played three new songs that haven’t been released yet. Excited! I was chatting with some others outside and one of them gave me a good recommendation for a cheap (in Chicago terms) restaurant that would be along my two mile trek to Wicker Park, where my concert was later that night. It was called something like Xico, and it was a Mexican restaurant with a bar. It was a great recommendation.

Sunset in Chicago…well, this is looking east

After this I hung out around the concert venue, a tiny old place called Subterranean, which had a massive long line. The show was sold out but I had purchased a ticket. It’s a bands from Alabama called Waxahatchee and I’ve been wanting to see them. I just showed the confirmation on my phone, got my wristband, and then entered the upstairs venue, a room which would end up packed with people. Sweaty people. It was a warm and humid evening, and even moreso inside. Also, there is no way in hell that building is fire safe. At least on the west coast it wouldn’t be. Hundreds of people up a tiny stairway in an old, dark wooden building. I found a spot that gave me a little bit of personal space – breathing room. I was basically off to the side and coincidentally, I was up against the rail for the stairs – I would have been the first one out in case of fire. Seriously, it was uncomfortable there. A bit annoying too, because there was a ‘professional’ photographer of some sort taking photos continuously, with an external flash, right up in front. In a dark room, it was blinding, several times a minute. Ugh. 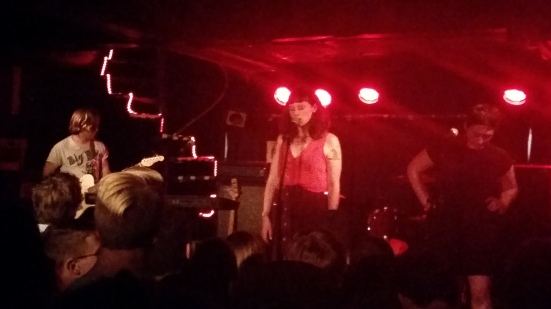 After the show, that corner was THE place to be, apparently. Hundreds of drunk people wandering around, making their own rules, walking through traffic, finding the next club to go to. Honestly, if you are in Chicago on a weekend and want to be out in a crowd, partying or people watching, go to the intersection of North/Milwaukee/Damen. I had the sense to walk a couple blocks before calling Uber. The driver was great and gave me a discount because I was intelligent (or sober…) enough to not call for a pickup in a crowd of dozens of others doing the same thing.

Slept in late and missed breakfast. There’s a theme developing here. I walked about five minutes down to a cute coffee shop and French cafe called The Borgeuois Pig for breakfast, coffee, and some web time. Hot and humid again, today. It ended up being a fairly lazy, though not uneventful day. I had been planning to make it to at least one Chicago brewery so I chose Revolution. It was best to take a bus rather than a train, Mr. GPS told me. Note to self: I should name my GPS. Something other than Siri. Well, I made it to Revolution, tried lots of beers I’ve never seen, and got some food. By the way, when I go to brewpubs (since there is a theme developing here), I don’t get wasted on full pints — I’ll typically get a good eight or so of the tasters (5 ounce pours). I’m all about variety. Eventually, I got back on the bus heading back to the hostel and noticed that the route went roughly by one of the famous pizza places. I figured I should give deep dish another try, since I tried one when I was there last time and considered it a massive failure. I chose Pequod’s. I got there and walked in to a massive waiting list and a sign saying that the cooking takes roughly 45 minutes, after you’ve finally received a table and ordered. I was planning on a pub crawl that the hostel was leading in the evening and wanted to be back in time, so I passed. Here’s where it gets fun. 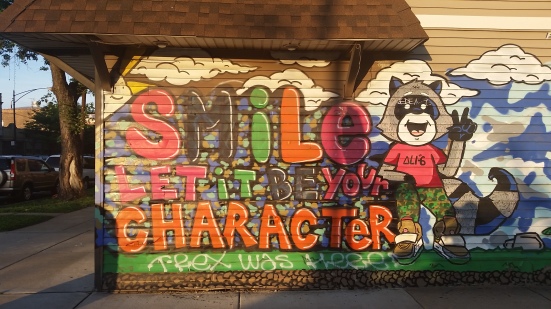 I got back on the bus and after 10-15 minutes, I noticed the view looked familiar….it looked like the street where Revolution Brewing was. Yes, I (was possibly intoxicated and) got on the bus going the wrong way. I decided to call Uber to take me to Lou Malnati’s, another famous pizza place within a few minutes walk of the hostel. I placed an order for the pizza over the website and it was ready when I arrived. It was an 8″ pizza in their special style and I forgot that they are so thick you basically need a knife and fork to eat it. But I needed to get back for the pub crawl, so I managed to eat it while walking. It was alright.

A quick change and freshening up in my hostel room and I was ready for the pub crawl. There were about 7 guys, plus the hostel employee who was the pub crawl-type, himself. I think I was the only one from the USA…Australians, Russians, … Oddly, one of my roommates said he was going on the crawl, was getting ready the same time as me, and left about a minute before I did…and I have no idea where he went, because he wasn’t on the crawl.

First pub, I spent the whole time talking to the waitress. Guess what? She wants to visit Portland. Shock, huh? After that we went to another pub with a not-too-special band playing. Well, I admire them for playing in that heat. I was basically dripping sweat, I can’t imagine how the drummer felt. My success here was getting the doorman to let me in without the $5 cover that everyone else in front of me paid. They charged for soda water, though, so that sucks.

Where John Dillinger was shot

Third pub: a much louder place. I think there was a dance club attached and there were TVs playing muted rap performances. It was loud. I chatted with the guys for a while and we decided to leave. We went to a cheap Mexican restaurant perfectly located for all the drinkers. I don’t have a clue what I ordered, but then I went home. The others said they were going drinking elsewhere. When I saw one the next morning, he told me they found some South Africans and drunk on the street until 5am. Whatever. I enjoyed sleeping.

I have to pick up a car today around 4:30, maybe earlier.

I actually did get up in time for breakfast this morning. The dining room in a hostel is an interesting place. A very collective atmosphere, people working together, groups forming, …all of the Asians eating rice while everyone else eats cereal and bagels and bacon, etc.  It’s a true observation I hadn’t thought about.

I checked out, stored my luggage, and went into the city with my camera. Basically, for hours I walked a lot through the area where the Cloud Gate is, and the Pritzker Pavilion…I walked down to a great hot dog place where I got a Southern slaw dog and the best Chicago dog I’ve had thus far. I sat by the Cloud Gate (the Bean) people watching and taking photos. I walked down to Lake Michigan and put my feet in. Eventually, I retrieved my luggage, went back to the car rental, and headed out toward Cleveland. 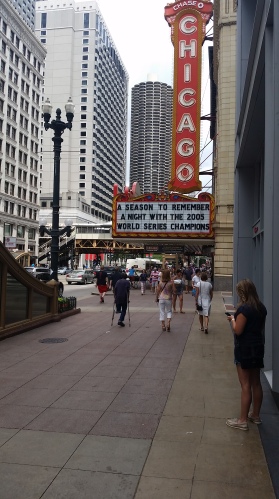 A good stopping point for the night was a (fairly dumpy) motel in Toledo, Ohio. One more state off my list.