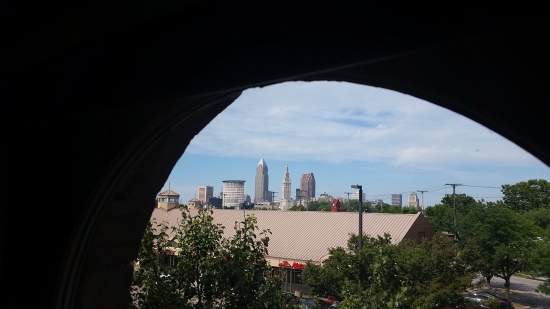 “Cleveland rocks!” is right. You can probably tell I am writing this post-trip, so I can now say one thing with certainty. Cleveland FAR exceeded my expectations and was far, far more fun and eventful than I could have imagined. I planned on spending one night there and ended up staying two and a half days. With that introduction given, here’s how it went down.

I’m not even going to talk about Toledo, Ohio, other than to say there is no reason ever to go there again. This was my first dumpy motel of the trip…I think. It was certainly my first Tim Horton’s. I was expecting Starbucks, but it’s actually much like Dunkin’ Donuts, overrated and overpriced. Again, strange looks and disbelief when I told them, “No, I don’t want sugar in my coffee.” Just to finish the rant, before I get on to wonderful Cleveland — before arriving in Toledo, I drove through Indiana. Second time in Indiana, and it seems like a horrible place. Every part of Indiana I have seen (various parts of the state) has looked ugly, oppressed, and full of semi-trailers. I guess that last part is because of its location, basically separating Chicago and Lake Michigan from the East, and carrying lots of goods. But driving through Indiana made me unhappy, except when I exited in South Bend and drove through the University of Notre Dame. I stopped at the soccer field and pictured the last time I watched womens’ soccer playoffs on ESPN. The field was covered in snow. It was about 90 degrees today – such a contrast in weather the Midwest experiences. I also stopped by the local Whole Foods and this made me sad. 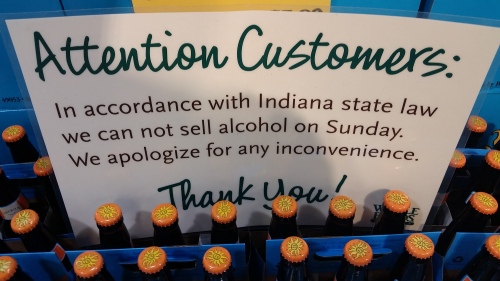 Rest Stop…or Oasis…or whatever that state calls it. A rest stop on the toll road (so you don’t have to exit the toll road)

It’s not a ‘citation’ ticket, just the little thing that records how far you’ve driven.

Indiana and Ohio both have an ungodly amount of tollbooths. Especially Indiana. That makes me sad.

A short drive from Toledo brought me to Cleveland and since I didn’t have any specific attraction or area in mind, I noticed a high Tripadvisor rating for the city Farmers’ Market and set that as my destination. Fortunately, or luckily, this market happens to be in a cool, beer-heavy neighborhood named Ohio City. I spent a little while perusing the Farmers’ Market (picture a smaller version of Philadelphia’s Reading Market) and was quickly reminded that Cleveland has, by far, the largest percentage of Hungarian-heritage residents of any city in the United States. It caught my attention because I lived in Hungary during 2011-2012 (see my blog archives) and recognized names.

I bought some coffee beans from the local roastery which had a space in the market. The lady working there asked where I was staying, I didn’t have an answer, and she recommended I check out the “Cleveland Hostel” just down the street. I researched this while enjoying a taster flight across the street at Great Lakes Brewing, and booked a private room w/ shared bath at the hostel. It was only about $60, but the website listed details and photos of each room and it had a quaint, independent B&B feel. It was just a blog away so I headed over. I rested briefly, changed into swimwear and headed to the beach for a dip in Lake Erie.

I was excited that there was a beach so close to the city – it basically is in the city. There were lifeguards, free parking, generally a good experience. That was until I realized that Ohio does not have a public smoking ban. Seriously, why go sit on the beach with your family and lie there smoking while the lifeguards watch your kids? But whatever. I had a nice conversation with an older man there with his family. He gave me some ideas of what to check out in the city. I did go swimming a bit. Actually, swimming isn’t the right word so much as squatting and flopping on my back. Lake Erie, at least in that area is very shallow – About 100 feet out from shore, it was barely up to my knees. The sand was nice, though, and it was very warm – 73 degrees.

Eventually, I headed out and drove to a local place called The Happy Dog. It’s a Cleveland spot…actually it looked like a dive bar… where you get a sheet of paper with all their ingredients and you check off everything you want them to pile on to a hot dog. For $6.

While I was there, trivia was beginning. I went through the stages of a) not wanting to embarrass myself among all the locals b) figuring I shouldn’t stay for the whole game c) deciding I’d play but just for a bit d) deciding I wouldn’t play officially but would just listen and revel in knowing the answers e) deciding I could stay for a bit and help out another team. I went with choice E.

Quick scan of the room looking for teams of attractive ladies or generally younger, cool people  – nope. Quick scan of the room looking for people who seemed serious about trivia – yep. They were right next to me… Several 40-50 year olds gathered at the bar next to me and I asked if they wanted an extra player for a little while. They agreed. I made a good judgement – turns out they are the team to beat. I was going to stay a couple rounds, then just for the first half, then for one more round, then…why not stay for the whole thing? They won, I answered two questions that none of them knew – one of them was about Carrie Underwood. It was a fun evening with some locals who I’ll never see again but who were appreciative and welcoming. After this I headed back to my place but before bed wandered the street for a late-night brewpub or bar. As mentioned earlier, I’m on a pub-heavy street. I had three or four choices within a block. I ended up at TownHall, with an awesome selection of beers on tap. Chelsea, the waitress, gave me some great tips for things in the city and also informed me that Lake Erie is one of the more disgusting bodies of water to submerge yourself in, that it’s literally filthy.