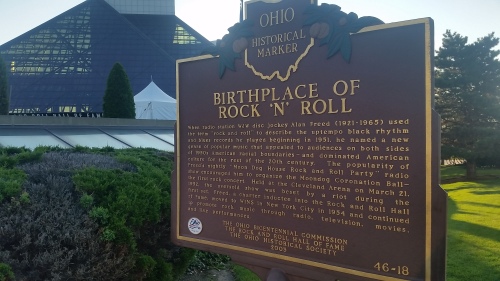 I woke up in my hostel with big plans for the day. I knew I’d be walking around a lot and had my list of places I had researched as well as all the places locals told me about yesterday. The hostel was pretty nice, a fairly new hostel and it seemed pretty trendy, relaxed, quiet,…I decided to see if they had room for a second night because I knew I wanted to stay another day. My particular room was already reserved but one across the hall was available. I booked it online, then went downstairs and asked if I could just move my stuff over since my new room had not been used that previous night. Thankfully, I was able to. I moved my stuff then headed out in my car toward downtown, just a couple miles away. My first destination – the Rock ‘n’ Roll Hall of Fame. Since this day involved a full day of walking, and much of that, wandering without purpose, I’ll make this post more of a summary rather than a detailed account.

I found meter parking near the Hall of Fame/Museum and went in, but not to see the museum. I really don’t have much interest in the rock museum…maybe I should? I’ve been right by the Seattle EMF Project several times and have never gone in – I guess music museums aren’t my thing. But I did enter for the purpose of buying a ticket to a concert that night. Following this emerging theme of seeing concerts on my trip, I discovered that Vinyl Theater and New Politics (two bands) were playing inside the museum that evening, and it was only $6 for a ticket. After that I walked uphill toward downtown (the HOF is on the water) and explored. I walked through the town square, into several historic buildings with ornate architecture and Tiffany glass, toward the Indians’ baseball stadium, past several pieces of public artwork, and more. Cleveland is a prominent ‘old money’ city – the Rockefellers and more are from Cleveland and there are many signs of that time a century ago, especially in the way of old buildings. Across the street from each other are two ‘arcades.’ Arcades are the first shopping malls. I spent hours walking, with a few coffee stops and food stops mixed in there.

After I got back to the car I headed just a mile or two east to the park area. Its actually… a very long stretch of green space which includes a 1-2 mile long Rockefeller Park, several cultural gardens, Botanical Gardens, the history museum and a complex of several art museums. The Cleveland Museum of Art was a large, world-class establishment and it’s free! It was wonderful –  I spent a couple hours there.

After this, I drove just up the road to Lake View Cemetery, atop the hill. Lake View is a massive, peaceful space which includes the final resting places of John D. Rockefeller, President Garfield, and the more obscure Ray Chapman, who some of you baseball fans may recognize. He’s the only baseball player ever to die from injuries suffering during a game, in 1920. 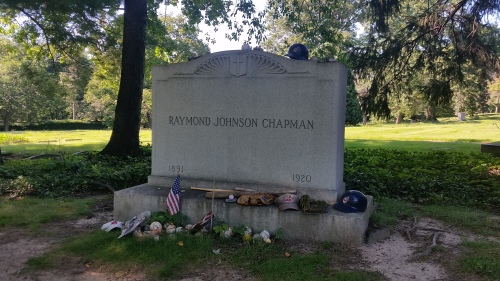 I ate dinner at a Latin bar/lounge/restaurant which had tacos in the now-familar ‘take the sheet and check off which ingredients you want’ format. Then I finished off the evening with the concert inside the Rock Museum. This $6 ticket included access to much of the museum, so I ended seeing the museum after all. It was pretty cool.

New Politics, inside the Museum

Back on the area of my hostel, I headed over to another late-night pub, a one-barrel brewery called NanoBrew. It was a nice end to the evening.